A bit about Australian culture and Halloween

I grew up in Australia; a child in the 80s, a teen in the 90s & a graduate of (senior) high school in the year 2000. When I was a child, very few Australians celebrated or really acknowledged Halloween. It was an American thing that we saw on the movies and in TV shows. A handful of trick-or-treaters would knock on our door Halloween night and ask for candy. We’d search our cupboards for the best crackers and cookies and offer those instead.

Nowadays in Australia, Halloween is more commercialized. We copycat American culture by selling Halloween costumes, candies & a few decorations, because we don’t want to miss out on this mystical party we see on TV every October. Trick-or-treating in fancy dress costumes is much more common for Aussie children today than ever before.

But, in Australia, October is spring, not autumn/fall. It is similar weather, but it does not have the same harvest backdrop that is experienced in the States. There are no pumpkin patches, corn mazes, hayrides, jack-o’-lanterns, or fall leaves. In fact, Australians don’t celebrate these things at harvest time either. It’s a different climate, a different harvest, and ultimately a different culture.

This is the context I come from. Add to that the fact that I grew up in a Christian family that was a little suspicious of Halloween with its ghosts and witches, and the result is an adult who has essentially NEVER celebrated Halloween. I’ve never donned a costume on October 31st, never knocked on doors for candy, never made a jack-o’-lantern…

A bit about American culture and Halloween

What I never realized as an Australian observing Halloween through a television screen, is that Halloween is intertwined with fall. In fact, I daresay that fall and harvest are the bigger celebrations. They come to a epic climax on Halloween and Thanksgiving, but they are so much more than just October 31st and the last Thursday in November.

There’s a very gradual shift in the weather that starts somewhere in September. The leaves on the trees begin to change color and us spectators start trekking to the mountains, and the famous Blue Ridge Parkway in Virginia, not far from where we live, and other parts of God’s creation like pretty parks and lakes, to photograph the stunning leaves. And let me tell you, there are far more changing leaves in the continental US than on the continent of Australia. Plus there is a whisper dancing on those leaves and a deep knowing in our bones… COLD is coming.

While it gets cold in plenty of southern places in Australia, I grew up in the Western Suburbs of Sydney where the cold is fleeting. It has never snowed in the general area that I lived in. But where I live in America, it will snow at least once or twice before winter is over and there are days of cold that never get much above freezing!! It’s a different climate (for me, at least). And winter here means that harvest is mostly–if not completely–over. So harvest has a weight here that is perhaps not as strongly perceived in Australia.

What are two big ticket items that are being harvested:
Pumpkins & corn.

People start making their pumpkin soups and their pumpkin pies and drinking hot drinks with lots of cinnamon because it’s cold, and eating corn on the cob and corn kernels and using corn starch in all sorts of things.

And over the years, Americans have developed traditions like fall festivals and walking through corn mazes. 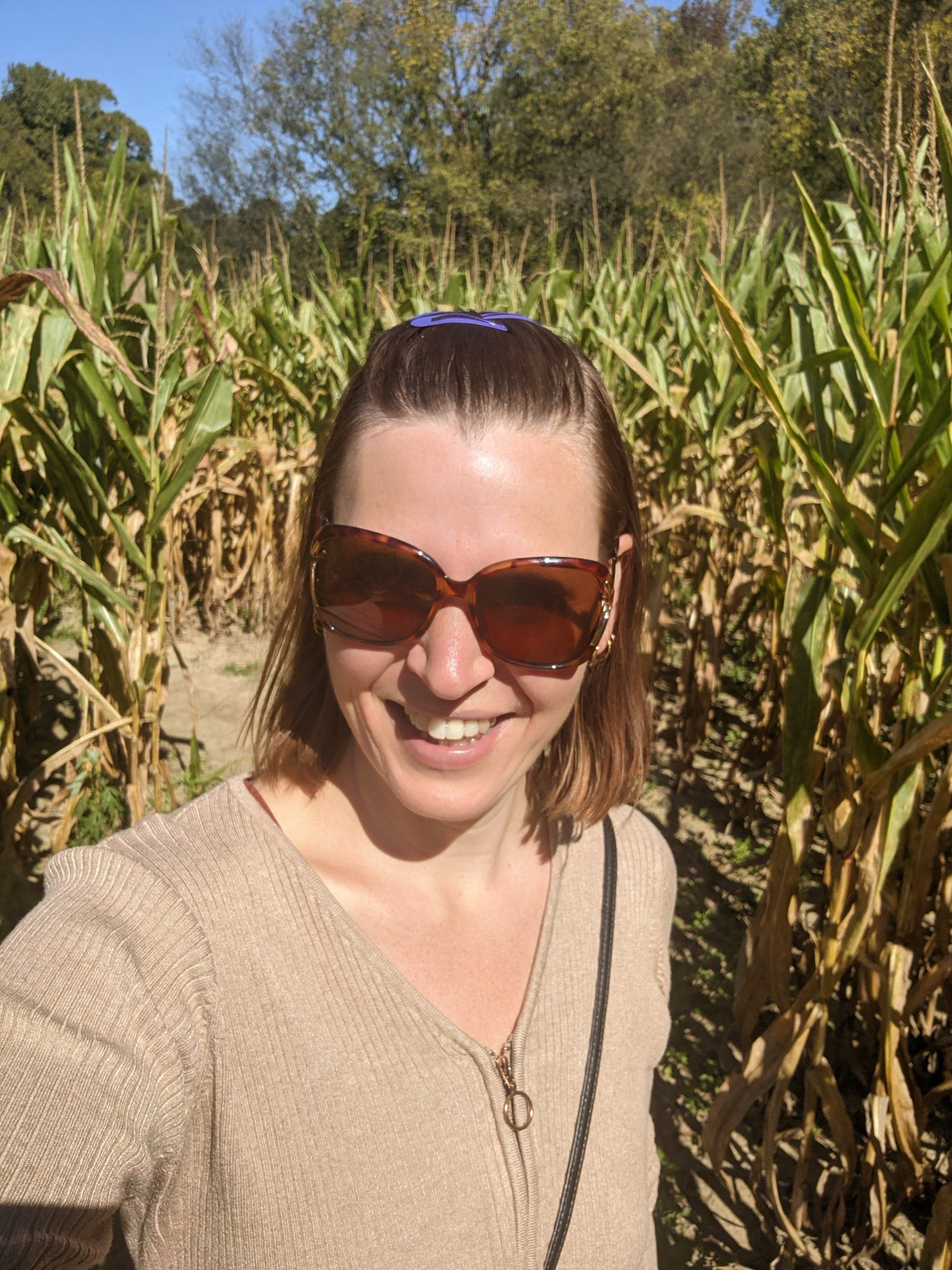 You’ve seen corn fields on creepy movies, right? A lot of farmers grow them—taller than your tallest friend—with paths going through them that create a maze for you to try to find your way out of. You can actually get lost in the really big ones! I experienced my first corn maze this year. It was for families like mine with toddlers. There’s one way in and couple of routes out—no getting lost if you follow the path.

There are also farms dedicated to growing pumpkins that are specifically for carving jack-o’-lanterns! I really had no idea that these pumpkins that look so massive, are mostly hollow inside, and apparently they don’t taste nice if you try to eat them. I went to my first pumpkin patch this year on a farm. We patted animals and saw a field of pumpkins where people chose one (or however many) to buy. We later bought a cheaper one a Walmart. Last night we visited friends and learned

How to make a Jack-o’-lantern:

1. Cut a hole around the stalk of the pumpkin so that you can lift the top off like a lid
2. Gut the pumpkin of seeds and flesh until the walls of the pumpkin are solid and smooth
3. Draw an outline of a face on the pumpkin as a guide, using shapes like squares and triangles that are easy to cut
4. Use a sharp knife to cut the face into the pumpkin outer layer / skin
5. Throw out excess pumpkin pieces so that it is hollow inside and you can safely light a candle and place it in the bottom of the lantern without starting a pumpkin fire
6. Replace the top of the pumpkin that you cut off at the beginning (ensuring it has no dangling bits that can catch on fire).
*This will be easiest with an appropriate jack-o’-lantern pumpkin, not one you eat!

How do you celebrate on Halloween:

Well, you can do the traditional trick-or-treating in costumes by knocking on your neighbors’ doors and asking for candy. Special Halloween buckets are sold and most neighbors play along by buying tons of candy! You can do it in groups or throw a Halloween block party.

For those of us who are still a little creeped out by Halloween, I recommend starting your own trunk-or-treat! Trunk-or-treat is a Christian/religious spin on trick-or-treating! Hundreds of kids will meet at churches in their Halloween costumes to play games, eat food and have treats from the trunks of cars. (Whether or not the car trunk is really involved, I have yet to witness, but that’s why it’s called trunk-or-treat). And that’s what my daughters and I will be doing tonight. My eldest will be dressed as Belle from Beauty and the Beast, my youngest in a black and orange tutu and I will be wearing my pumpkin fall leggings from Walmart and an orange shirt I picked up at Goodwill.

And if you need a creepy but Christian book to read this Halloween, the 3rd and final instalment of my series Covenant-999 was released at 12am this morning!