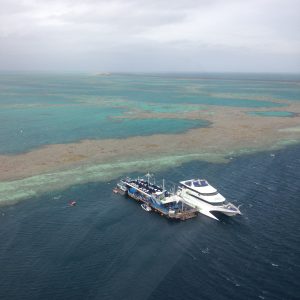 On Wednesday morning JD and I boarded a ferry to the Great Barrier Reef pontoon. The pontoon is a three storey building way out at sea with lots of outdoor areas, an underwater viewing area (an aquarium of windows looking out into the ocean that can fit about 30 visitors and has constant schools of fish swimming around it), and some indoor quarters for staff including change rooms for visitors. The pontoon is basically tied to the ocean floor by heavy weights and cables and is floating above sea level.

When we arrived we visited the aquarium and then took a small semi-submersible boat called the Sea Urchin out to view the reef from underwater windows.

We then waited until the crowd of 300 people had done their snorkelling and taken the ferry back to the mainland. There were only 5 of us staying the night plus half a dozen or more staff. We jumped into the ocean to do our snorkelling at 3:30pm and had the reef to ourselves. We got to see beautifully coloured clams, coral and fish and, guess what, we even found Nemo’s cousin, a brown and white striped clownfish amongst them. The water wasn’t as warm as I had expected and even though I was wearing a wetsuit, my teeth were chattering within half an hour so I got out soon after that while JD kept snorkelling.

We watched the sunset and heard & saw large trevally fish snapping up their dinner through a large viewing hole on the pontoon.

We ate delicious seafood chowder, fish, steak, chicken kebabs and vegetables for dinner and got to know the three people staying on the reef with us. Ten year old Jack was a walking, talking animal encyclopaedia who grew up on the farm out in “whoop whoop” NSW with his parents Phil and Jodie. We had some interesting discussions about farm life, work life, books, Aussie & American politics, and religion / God etc. Our main host on the reef, Jennifer from Belgium, was lovely as well. She set up a swag for JD and I underneath the pontoon decking, while the other three visitors opted to stay in indoor quarters.

We had been planning to sleep on the second level of the pontoon, under the stars in the swag (a small tent the size of a double bed with a thin double mattress and sleeping-bag inside), but unfortunately we booked a night that was forecasted to rain and had to put the swag under shelter.

Sleeping on the pontoon, we awoke to loud noises at least half a dozen times. The wind was howling, waves crashing, seabirds chirping half the night (they land on the pontoon, regurgitate fish and crap on deck once the sun has set–this is sometimes a big problem, though fortunately during our stay I think the wind kept them somewhat at bay), not to mention the deck chairs upstairs were rattling around and moored boats banged against the side of the pontoon. But the waves that caused the pontoon to sway were actually quite soothing and reminded us of being rocked to sleep! It rained in the night and I kept wondering if we were going to get washed away, but we stayed dry and warm enough in the swag.

JD and I spent a few spare hours here and there reading a great book called “Passionate Marriage,” (I’d highly recommend it to anyone in a committed relationship). In the morning we read upstairs on the decking in the 20-24mph strong winds. We also visited the aquarium quite a lot while the rest of the tourists weren’t around. Breakfast of hash browns, bacon and eggs were ready at 7:30. It was high tide and the sea looked too rough for snorkelling so we waited until another crowd of 300 people arrived at 11am and planned to pay an instructor to take us scuba diving for half an hour. Unfortunately, due to my honesty on the medical forms, I was not permitted to scuba dive because I once had an asthma attack as an adult and they required medical clearance for me to dive. I had been really nervous about scuba diving but also super keen to conquer my fears and do what I’d dreamed about as a child: scuba dive on the Great Barrier Reef. So I was terribly disappointed when they said I couldn’t dive, and spent the next few minutes crying in the bathroom. I encouraged JD to go without me and spent slightly more on a helicopter ride to view the famous Heart Reef. It’s a crazy expensive, 10 minute helicopter ride ($145 AUD), but the view of the reef from above was truly amazing: aqua waters, swirly corals near the surface and dark blue channels where the water is apparently 50-60 meters deep. The heart shaped reef was beautiful and something you can only see from the air. I had been debating whether or not to take that helicopter ride for months while planning our trip. I think it was a good substitute in light of the diving debacle. 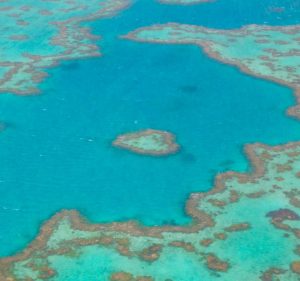 JD scuba dived and then snorkelled for close to 3 hours (he was wearing 3 wetsuits to keep warm in the 22C / 72F). I decided I couldn’t hack the wind and cold water temps again, knowing that we still have one more snorkelling day coming up.

Both days we had a buffet lunch on the ferry while it was docked by the pontoon and we boarded to return to the mainland home at 3pm after our 28hour stay on the pontoon. The waves were incredibly choppy for the 3 hour ride back and most passengers took sea sickness tablets before leaving, including JD and myself. It hadn’t rained during the day at the pontoon but started again on the ride home and is pouring down now. Glad we’re not doing the reef sleep tonight, although Tuesday night would have been better conditions than Wednesday, but then, we wouldn’t have had the same adventure!