The islands of Hawaii were formed out of hardened lava rock, so when you fly into Kona airport, black rock is all you can see for miles around. But don’t be disconcerted. The lava rock has become a playground for luscious, green jungles; rainbow clad waterfalls; and the Kilauea volcano itself!

The open airport takes some tourist by surprise. 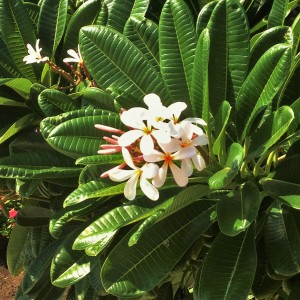 It has columns to hold up the ceiling, but not enclosed walls. Immediately outside of the airport there are shuttle buses waiting to take people to a range of hire cars places. Australians, beware that a lot of hire car companies will try to take you for a ride by charging outrageous insurance prices. Discuss car insurance with your travel agents and credit card companies before arrival. We found that as members of Costco international, the hire car price was discounted, and Barclay credit card company covered the most important details of our car insurance. As these are American companies, Aussies will need to look into what Australian companies can do for them.

Before arriving on Hawaii island, my husband and I wrote a basic itinerary of the most important attractions we wanted to see. Our top three were: Volcano National Park, Rainbow Falls and snorkelling at Captain Cook Monument. We arrived on a Sunday and had our wedding planned for the following Friday. We’d heard about black sand beach, green sand beach, the botanical gardens, Thurston lava tube, Kona coffee, luaus and the possibility of swimming with dolphins, turtles, sharks, mantra rays etc. So there were plenty of options. As we travelled with 29 other family members and friends, I will write about some of the adventures that our group had.

The day after we arrived we decided to go to Rainbow Falls. There are a few words of warning that need to be given about these particular Falls. One is to bring bug repellent: pack it in your luggage in case you can’t find any to buy in Hawaii. The other is to keep an eye on your car. Apparently Rainbow Falls is notorious for car break-ins because the locals expect a lot of tourist vehicles to be parked there. My sister and brother-in-law had two of their tyres slashed after someone failed to break into their hire car. Fortunately the car was easily replaced the same day by the rental car company. Unfortunately, however, this took a large chunk of time out of our site seeing plans for that day. 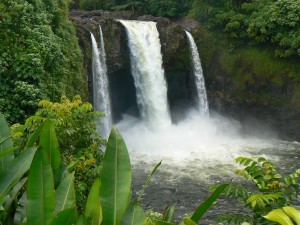 Rainbow Falls is beautiful. The view is a stone’s throw from the car park. There are stairs climbing up to a closer view, followed by some jungle areas leading to the rapids that cascade down the falls. My brother, the dare devil, climbed on the rocks between the rapids and got as close to the falls as he could get. More often than not, the spray of the falls creates a rainbow that arches over the falls, giving it its name (mind you, rainbows are commonly seen at Niagara falls and probably many other waterfalls as well).

The falls are about a twenty minute drive from Hawaii Tropical Botannical Gardens. 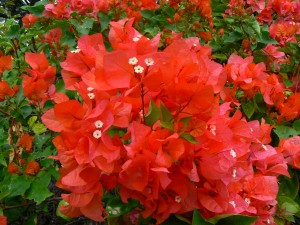 Several from our group made it to the gardens while the majority unfortunately missed out during the kafuffle with the slashed tyres. I hear that the gardens are magnificent and well worth seeing if you are already in the area. The gardens contain huge trees, colourful leaves and flowers, some of which are unique to Hawaii and the entire garden slopes down to the ocean which you can trek down to. Missing the botanical gardens is by far my biggest regret from our trip to Hawaii.

Visiting Volcano National Park was absolutely top of my list of things to do on the Big Island. There are many ways to see it and our group decided to split up; some taking adventure bus tours, others driving themselves. Those who waited until night time to see Kilauea were able to see and orangey red glow, illuminate the sky, just above the mouth of the volcano.

Night viewings come highly recommended, but it was quite a long drive from our accommodation and my husband and I were able to make more stops by seeing it during the day time. Even in the day time there is smoke rising from the huge crater that leads down to the lava flow. We listened in awe to a tour guide talk about how the landscape is constantly changing and eventually they will have to relocate the visitors centre because the volcano is widening. He explained why it is no longer safe to approach the mouth of the volcano, and we were happy viewing it from the relative safety of the visitor’s platform.

Prior to seeing the volcano itself, after entering the national park, we found Thurston lava tube and took a walk through the brush, in the sprinkling rain, down into the tube. Having some of our nieces and nephews with us made the adventure more exciting. A lava tube is a large tunnel formed by lava rock, that feels similar to a cave. It is worth the visit if you’ve never been inside a lava tube before and, visiting the entire national park only costs a few dollars per carload. My in-laws had an American national parks pass so we could enter for free. 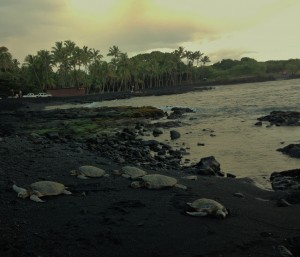 On the return trip from Volcano National Park, my husband and I hopped in his brother’s car with three of our nieces and visited Black Sand Beach. I was truly in awe of this beach. I don’t know what I expected but I was genuinely surprised that black sand felt essentially the same as white sand. I mean, logically, why shouldn’t it? I think I just suspected it was shards of rock and might be tougher on the feet, but it was surprisingly soft. There were turtles camped on the sand when we visited and I could see there would be a great opportunity to swim with the turtles at this beach. It is also easily accessible from the carparks.

The day before our wedding, 14 from our group went snorkelling with Dolphin Discoveries. The crew we had on the day were exceptionally good. Captain Dale was able to find a pod of dolphins for us to snorkel with, which was truly an amazing experience. My brother captured some great videos on his GoPro. We spent ample time with the dolphins out in the ocean before moving on to Captain Cook’s monument where we swam amongst coral formations with beautiful fish. The monument looks difficult to get to by land, but much easier by boat. It is one of the best places to snorkel on the Big Island. 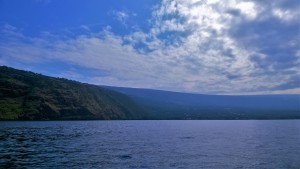 Snorkelling gear was provided including flotation devices for less competent swimmers, but we had calm waters and I did not feel unsafe without the noodles, using the flippers and mouth gear. For all those, like me, who are concerned about needing to pee while on a 2-3 hour snorkel trip, FYI you will be peeing in the deep blue ocean if you have to go!

We had a terrific time snorkelling. Afterward, we ate lunch at a nearby restaurant that serves avocado fries. They were delicious! Two of my sisters-in-law also went swimming with mantra rays the night before and loved it, so there are a lot of different snorkelling options for tourists to enquire about. 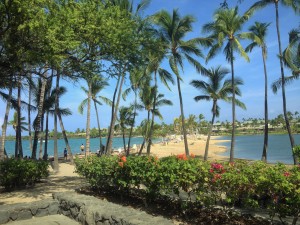 The following day, our celebration wedding ceremony was held in Anaeho’omalu Bay and I wish we could have spent some time at the beach there. It looked like another good place to go snorkelling–quite picturesque. Our reception was a short walk from Anaeho’omalu Bay, at Lava Lava Beach Club and exceeded my expectations with the added bonus of the forecasted rain holding off. If you’d like to learn more about my wedding on the Big Island, read my blog “Planning a Wedding on the Big Island.”

We returned to Anaeho’omalu Bay the day after the wedding for a trip on a glass bottom boat. Personally I found this a little on the boring side. Yes we could see coral and fish through the glass, but I’d already been snorkelling and having lived in Australia, the coral in Hawaii is much less colourful (no offence). However, it was fun for the nieces and nephews and was a short and relaxing trip.

I was super keen to have my haircut that day. After growing it for several years in the lead-up to getting married, all I wanted to do was have that hot, heavy mass, chopped off! So I spent the afternoon getting my haircut in the expensive Waikoloa Village. Waikoloa Village is a great place to shop, it is well manicured with beautiful frangipanis and orchids. There’s a large fish pond, plenty of food in the food court, some familiar American shops and other, more touristy shops.

For more ideas about what you can do on the Big Island, check out my Hawaii board on Pinterest.